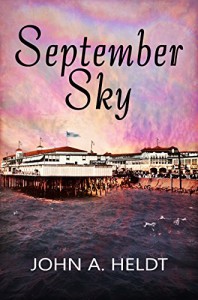 When unemployed San Francisco reporter Chuck Townsend, 45, and his college dropout son, Justin, take a trip to Mexico in 2016, each hopes to rebuild a relationship after years of estrangement. But their journey takes an unexpected turn when they meet a cruise-ship lecturer who has discovered the secret of time travel.

Within days, Chuck and Justin find themselves in 1900, riding a train to Texas, intent on preventing a distant uncle from being hanged for a crime he did not commit. Their quick trip to Galveston, however, becomes long and complicated when they wrangle with business rivals and fall for two beautiful librarians on the eve of a hurricane that will destroy the city.

Filled with humor, history, romance, and heartbreak, September Sky follows two directionless souls on the adventure of a lifetime as they try to make their peace with the past, find new purposes, and grapple with the knowledge of things to come.

As much as it engaged me from the beginning this story also brought tears to my eyes on behalf of the characters when certain situations seemed almost hopeless. Especially enjoyed the relationship that evolved between Charles and Justin Townsend, the estranged father and son slowly became close and in time best of friends over the course of their time together.

The pacing, the timing, the flow of each chapter into the next was as usual easy to follow and very much filled with moments that came alive for me as the journey that Chuck and Justin undertook unfolded.

I felt their turmoil as they became enmeshed with the people of 1900 Galveston, relationships were formed that they neither expected nor hoped for prior to their trip. Not only were these relationships unexpected they caused both Chuck and Justin many hours of worry as to how the truth of where and when they both came from would be received once explained.

The worst part about traveling from 2016 to 1900 was the knowledge about the mass destruction and deaths looming over the town of Galveston at the hands of a category 5 Hurricane, a storm that residents never dreamed would cause as much damage and loss of life as it did.

How does one know ahead of time that such a horrendous catastrophe would happen and not be able to avert a lot of the danger by informing authorities and preparing the inhabitants rather than having to keep the knowledge to oneself so as not to drastically alter history?

This was the the true test faced by our intrepid duo of time travelers, one that became even more urgent as the time for them to leave 1900 Galveston counted down. What occurred next ratcheted up the readers tension and left one in no doubt that once again like a magician pulling a rabbit out of his hat this author has created a masterful story that combined all the best elements into one read!

I have to say that as usual am in awe of the depth of description used that brings both the settings and the characters to vivid life, am also happy at the way the book ended as it allows one to find closure and also the hope of new beginnings in books to come.

I am grateful to have been asked to read and share my thoughts on this book by the author, it was intriguing to me because of the main storyline being a Texas setting was both familiar and easy to relate to. My kudos to not only the development of the characters, the connecting plots and all the different elements that made up this story as it was well worth my time as has been true of every book that I have read by John A Heldt thus far.