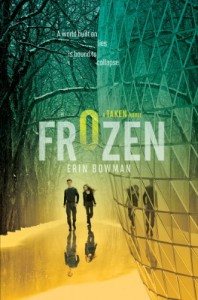 The Heists were only the beginning.

Gray Weathersby escaped from the primitive town of Claysoot expecting to find answers, but what he discovered shook him to the core: A ruthless dictator with absolute power. An army of young soldiers blinded by lies. And a growing rebellion determined to fight back.

Now Gray has joined a team of rebels on a harsh, icy journey in search of allies who can help them set things right. But in a world built on lies, Gray must constantly question whether any ally—or enemy—is truly what they seem…

Second book in Taken series picked up where first book Taken left off and did not engage me fully until it hit about a third of the way into the book.

This however was the book that sparked my interest in continuing with the next if and when get a chance to read Forged which will conclude the trilogy.

Finally have connected solidly with Gray and the others, it took the traumatic experiences that they went through in this one to really make me feel like what was happening was showing their respective characters to their best advantage. Gray especially has finally started to show signs of maturing, though he is still driven by his emotional reactions more often than not at times.

With several characters dead, an unexpected ally and a lot of luck Gray and the others find themselves now actually a part of the rebellion and on the frontline of the coming war.

It is a tossup to say the least that one does not know whether to laugh or cry when finishing this story.

I feel like the third book is one that will top the first two, at least it should with all the revelations in this one that came out and the jaw dropper twists that happen near the end really shook up the direction in which the last book will take us.