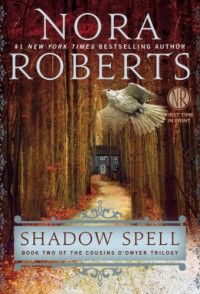 From #1 New York Times bestselling author Nora Roberts comes a trilogy about the land we’re drawn to, the family we learn to cherish, and the people we long to love…

With the legends and lore of Ireland running through his blood, falconer Connor O’Dwyer is proud to call County Mayo home. It’s where his sister, Branna, lives and works, where his cousin, Iona, has found true love, and where his childhood friends form a circle that can’t be broken…

A circle that is about to be stretched out of shape—by a long-awaited kiss.

Meara Quinn is Branna’s best friend, a sister in all but blood. Her and Connor’s paths cross almost daily, as Connor takes tourists on hawk walks and Meara guides them on horseback across the lush countryside. She has the eyes of a gypsy and the body of a goddess…things Connor has always taken for granted—until his brush with death propels them into a quick, hot tangle.

Plenty of women have found their way to Connor’s bed, but none to his heart until now. Frustratingly, Meara is okay with just the heat, afraid to lose herself—and their friendship—to something more. But soon, Connor will see the full force and fury of what runs in his blood. And he will need his family and friends around him when his past rolls in like the fog, threatening an end to all he loves…

And the final book in the trilogy
Blood Magick

Just as powerfully moving to me as Book 1 Dark Witch with the added benefit of seeing Connor and Meara become the couple that they should have years ago. Friends now turned lovers as well only adds power to the bonds already forged since childhood and the additional power is sorely needed in the quest to defeat the evil sorcerer Cabhan once and for all!

I am so ready for the conclusion to this trilogy, it has been a lovely interlude with cherished characters who will be sad to see go but so need to finally have Branna and Fin come together and find happiness. I surely hope that when book three releases in late October of 2014 that the library will have a copy of Blood Magick to borrow or I will be left forever forlorn not knowing how things ended!