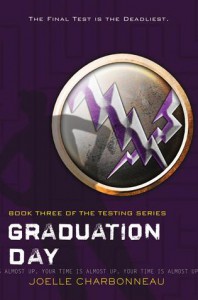 In a scarred and brutal future, The United Commonwealth teeters on the brink of all-out civil war. The rebel resistance plots against a government that rules with cruelty and cunning. Gifted student and Testing survivor Cia Vale vows to fight. But she can't do it alone. This is the chance to lead that Cia has trained for - but who will follow? Plunging through layers of danger and deception, Cia must risk the lives of those she loves - and gamble on the loyalty of her lethal classmates.

For me this was somewhat of a letdown after the passionate intensity of the first two books, to say this third book fell short is too harsh but for most of the read it did not strike the same chord of emotional connection as the previous books had done.

Partly think this was due to the fact this was more of a "thinking" kind of story rather than action oriented, that meant deeper concentration which in turn meant "drier" content to digest.

It was still full of nerve wracking danger for Cia and the others, with the stakes raised even higher and the sacrifices made even more heartbreaking but in the end the final twist was in character for what I expected.