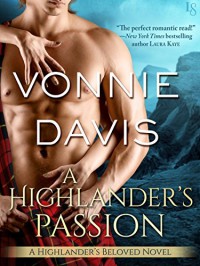 Two of the wildest hearts in Scotland fight for their destiny in this searing-hot romance, sure to be devoured by fans of Jennifer Ashley’s Shifters Unbound series and Shelly Laurenston’s Pride Stories.

As a bear-shifter in a pack roaming the Scottish countryside, Bryce Matheson embodies brute force and untamed abandon. As a widower, he’s running scared. When Bryce attempted to open his scarred heart to another, she grew tired of waiting for him to state his intentions, and the unearthly beauty spurned him for someone who wasn’t worthy. But now that fate has conspired to set Kenzie Denune free once again, Bryce vows to finally win her love.

Kenzie is a witch who summons her powers to protect those too weak to care for themselves. After surviving an abusive husband, she swears off men—even men like Bryce, whose iron muscles make her knees weak, and whose piercing eyes fill her with longing. Her life’s purpose is to help others. However, dark forces have different plans for her gifts. To save herself, Kenzie must team up with the shifter who has always stirred her soul—and trust in a passion powerful enough to set her blood aflame.

This is about second chances, second chance for happiness, also for love and family that has been longed for by both Bryce and Kenzie for many years.

As children the pair were inseparable, until Bryce met the first love of his life Miranda and at that point the friendship that may have blossomed into more with Kenzie was forgotten,

After Bryce lost his wife when she birthed their daughter he found himself grief stricken, so deeply mourning Miranda that he closed himself off from everyone but his baby girl for a very long time.

Kenzie had loved Bryce since childhood, when he finally found his way to approaching her as more than a friend she was over the moon until the day he broke her heart when he told her he felt like it was wrong for them to be happy together as it betrayed his deceased wife.

She moved on and married another man, a man who swore he would love her as well as take care of her. Her husband Duncan broke every promise he made on their wedding day, his abuse led her to the conclusion that no man was trustworthy.

Now widowed years later Kenzie is once again finding herself being sought after by Bryce, the only problem is she had her heart trampled upon twice and has no intention of letting it happen again.

As Bryce and Kenzie slowly work through the heartache from the past their previous turbulent chemistry once again takes them to heights of ecstasy, a brilliant promise for a glorious future together raising young Colleen and if lucky having children together as well.

The future together however becomes uncertain when a threat to Kenzie comes calling, a threat that will take her life if not stopped.

This story was filled with a lot of laughs provided by both Kenzie’s employer/mentor Effie Monroe and young Colleen Matheson who is Bryce’s daughter. Their is also suspense, tension, sensual heat, and a lot of drama both before and after the relationship between Bryce and Kenzie becomes fully realized.

At the end there is a much awaited and much anticipated joyful conclusion to a turbulent paranormal romance.