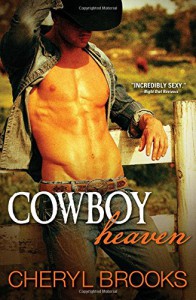 When widow Angela McClure decides to let loose and start a secret affair with a younger ranch hand, she inflames rancher Dusty Jackson's long simmering desire. Both men are irresistible - and forbidden - so Angela forms a plan to divert her old-fashioned father's suspicions: flirt with all of "her cowboys.' The new competition makes Circle Bar K ranch hotter than it's ever been before...

Be aware that this is written for mature adults, be also aware you should be willing to suspend belief in realism and just go with the story and in my opinion also be aware that sometimes having fun with your characters allows the reader to have fun vicariously in a manner that will be safe while still full of thrills along the way.

Angela McClure is not your typical over 40 female lead, she is the daughter and heir to a Wyoming ranch where she lives with her ailing father and a bunkhouse full of cowboys.

Having raised her sons and now having been alone after being widowed 2 years before Angela is basically about as lonely for human contact as she can get, even a handshake can make her day just because it allowed her a brief moment of warmth and connection to another human being.

On her way into town for some supplies she spies a cowboy on the side of the road hitchhiking. While on her way home from town 3 hours later she comes upon the same handsome cowboy, still on foot carrying his saddle and he halfheartedly attempts to thumb a ride. Much to the surprise of Angela as well as the cowboy she stops and asks him to get in to her truck. Finding out that he is on the way to Jackson Hole for the upcoming rodeo she tells him he can ride with her until her ranch turnoff where she will let him out.

As Angela gets to talking with young Troy she finds herself attracted to his masculine good looks, she also realizes that she may have a way in which they can help each other out beyond just the short ride in the truck. Thing is one of her cowboys has recently broken his leg so while Dusty is out of commission the ranch is short a hand, Liam is flat broke and at his own admission grew up doing ranch work so filling in is right up his alley.

Of course where would we be if a ranch hand job were the only reason for taking the sexy young cowboy home?

This is where you need to start ”going with the flow” as the unabashed fantasies playing out in Angela’s head are not only scorching they are full fledged blush worthy descriptions that are not meant to be read by the faint of heart, or someone with any kind of sexual inhibitions.

If you are looking for something outrageous, in a good way, look no farther as this tale of a lonely widow on a ranch full of single cowboys is intriguing as well as has a twist that bumps it into more serious territory near the end.